An almost unchanged six-person executive council and president were chosen late the last day of the conference to lead Inuit in Canada, Alaska, and Greenland for the next three years through an effort to combine forces against perceived threats to Inuit self-determination. The only new faces on the council are Canadians: Rhonda Innuksuk and Mark Gordon, replacing John Amagoalik and Mary Simon, who stated they had other commitments with their national and regional work. Greenland’s Hans-Pavia Rosing was re-elected for another term as president after a tense few hours of challenge from the Canadian delegate’s choice, Charlie Watt.

This year marked the first time in the six-year history of the ICC that there was any real politicking for the presidency. Charlie Watt, co-chairman of the Inuit Committee on National Issues and a veteran Inuit leader in Canada was the Canadians’ bid to assert a leader in the international organization — there has been no Canadian ICC president. His efforts seemed doomed when Willie Hensley from Kotzebue, running as Alaska’s candidate, withdrew from the race after the first vote and threw his support to Rosing. After the third vote deadlock, with Greenland and Alaska solidly behind Rosing, Watt threw in the towel and gave his support to Rosing.

The ICC is based on a consensual form of democracy whereby two-thirds of the delegates from each member country must agree before a president can be named. While the process worked in 1977 and 1980, when delegates voted unanimously for Eben Hopson and Hans-Pavia Rosing, this year a deadlock threatened the principle of consensus, which was saved only after Charlie Watt, pressured by the rules of the game, threw his support to Mr. Rosing after the final vote.

The week highlighted some serious discussion about the course ICC should take in order to preserve Inuit culture through education, exchanges, communications, and elders’ conferences. Arctic Policy, however, which some observers thought would be a strongly-worded declaration stating Inuit goals for Arctic development and would make a clear stand on such issues as oil and gas exploration, military build-up, and political development in the Arctic, was left as a loosely structured set of resolutions to be further defined by the ICC in the years to come.

Governments which might have worried about a potentially embarrassing or strongly worded directive from Inuit will doubtless breathe a sigh of relief. The mood of this meeting, perhaps the very concept of ICC itself, is one of careful agreement and conciliation among Inuit about the basic steps needed to take their society towards cultural protection — political outbursts and threats have not been the style of the organization.

The international Inuit organization has progressed since its founding in 1977 when the late Eben Hopson of Alaska called together Inuit leaders to form a common front against damage to the Inuit environment and society through careless development by outside forces.

In 1980 at the Nuuk general assembly, the 54 delegates worked out a charter and resolutions plotting the basic principles and direction of future ICC work. In between that gathering and this year’s assembly, the ICC gained consultative status at the United Nations, which will provide Inuit with an access to the international forum on matters affecting the Arctic.

In the last three years the ICC has also made its presence known by actively intervening at National Energy Board hearings in Ottawa, when the organization channeled its forces against a Canadian marine transportation system, the Arctic Pilot Project.

What the ICC Arctic Policy Offers now is a set of fundamental resolutions passed by 54 Inuit leaders from Canada, Alaska, and Greenland; what still needs to be done is the setting of a course of action desired by the Inuit in order to follow through with their stated believes. 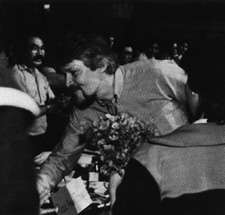