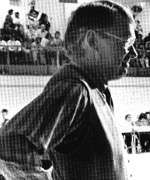 On the evening preceding the opening of the ICC conference at Frobisher Bay, ICC Executive-Committee member James Stotts announced to the press that Canadian Supreme Court Justice Thomas Berger had been selected to be chairman of the Alaska Native Review Commission (ANRC), the ICC’s own study of the impact of the Alaska Native Claims Settlement Act (ANCSA) on Alaska Inuit (APR, April 1983).

On the following day, Justice Berger addressed the opening session of the General Assembly, noting the likelihood of controversy to be generated by this bold initiative. “What the ICC is establishing is a commission that would ordinarily be carried out under government auspices,” he said. “This has far-reaching implications. Arctic peoples, living under three national flags, have set up their own commission to review what has happened in Alaska and to consider its significance not just for the Inuit of Alaska, but for the Inuit of the circumpolar community. It is a venture that will be watched closely.”

In the letter of invitation to Berger asking him to head the ICC inquiry, Stotts voiced common concerns about the effectiveness of ANCSA in protecting Native culture. “ANCSA did nothing to clarify governmental jurisdictional relationships,” he wrote. “As vital as it is, the issue of native sovereignty and self-government was neglected.”

He was named to the Canadian Supreme Court in 1971, and in 1974, was selected to head the inquiry into the impacts of the proposed Mackenzie Valley natural gas pipeline. His report was not only influential in the government’s subsequent placing a ten-year moratorium on the project, but it is regarded as a blueprint document for arctic development. Berger’s outspoken support for the inclusion of aboriginal rights in the Canadian constitution was met with open criticism by Prime Minister Trudeau and later censure by a judicial board of review. This action prompted his recent resignation from the British Columbia Court of Appeals.

The Witness of the People

It is likely that Berger’s unique information-gathering skills, more than his personal prestige, will lend much authority to the conclusions of the review commission. Alaskans will observe first hand the process of public hearings which has become such an important part of political decision-making in the Canadian North.

During the course of the Mackenzie Valley Inquiry, Berger visited every community in the region, staying for as long as people had something to say. Berger noted that while “we cannot — indeed, should not — attempt to repeat that inquiry in Alaska,” his strategy will include the same kind of public hearings and give equal weight to the testimony of ordinary people and scientists and experts. “It is not enough simply to read about northern people,” he told the ICC Assembly. “You have to be there, you have to listen to the people to know what is really going on in their towns and villages and in their minds…

“The contributions of ordinary people were important in the assessment of even the most technical subjects. For example, I based the chapter of my report dealing with the biological vulnerability of the Beaufort Sea not only on the evidence of the biologists who testified at the formal hearings, but also on the views of the Inuit hunters who spoke out at the community hearings. The same is true of the sea-bed ice scour, and of oil spills: they are technical subjects but our understanding of them was furthered by the testimony from people who live in the region…

“Let me give another example: when Canada and Alaska’s most renowned caribou biologists testified at the Inquiry, they described the life cycle, habitat dependencies, and migrations and provided a host of details about the Porcupine caribou herd. Expert evidence from anthropologists, sociologists, and geographers described the Native peoples dependency on caribou, and the consequences of a change of diet. Then the Native people spoke for themselves at the community hearings about the caribou as a link with their past, as a present-day food source, and as security for the future. Only in this way could a sound assessment of impact be made.

“When discussion turned to issues relating to social and cultural impact, the usefulness of obtaining the views of local residents was equally important. This is nowhere more important than in the consideration of Native claims…

“The most important contribution of the community hearings was, I think, the insight it gave us into the true nature of Native goals and aspirations. No academic treatise or discussion, no formal presentation of the claims of Native people by the Native organizations and their leaders, could offer as compelling and vivid a picture of the goals and aspirations of the Native people as their own testimony. In no other way could we have discovered the depth of feeling regarding past wrongs and future hopes, and the determination of Native people to assert their collective identity today and in years to come.”

The Strength of Native Culture

Berger concluded his talk with his own reflections on what Native culture means to Natives. “But I should tell you what I have found in my own country,” he said. “I have found that Native people do not wish to return to the past. They have no desire to see Native culture, native communities, and the Native economy preserved in amber. Rather, they wish to ensure that their culture can grow and change — in directions they choose for themselves.

“For Native people, their culture is still a dynamic force in their lives. I have found that the culture of Native people amounts to more than crafts and carvings. Their tradition of decision-making by consensus, their respect for the wisdom of their elders, their concept of the extended family life, their belief in a special relationship with the land, their regard for the environment, their willingness to share — all of these values persist in one form or another within their own culture, even though they have been under unremitting pressure to abandon them.

“So the task for the Inuit is to secure for themselves a distinct and contemporary place in the world… The Inuit are seeking to work out a new social contract with the nation-states where they live.”

Berger stated in his address that the credibility of the ANCSA review would depend upon its perceived integrity and independence from the ICC Hans-Pavia Rosing announced that a special trust fund would be set up for financing the project to insure its independence. Once the study is done, the ICC will make the report available to Congress, the U.N. and the local governments in the circumpolar region.

As Berger and others had expected, his appointment stirred up some controversy. In Alaska, Sam Kito, chairman of the Alaska Federation of Natives (AFN), expressed disappointment that the ICC hadn’t contacted the AFN about the two-year project. Later, Berger met with AFN leaders in Alaska, including Kito, and was able to answer their questions and discuss the scope of the inquiry.

Commentators have speculated that the work of the commission will have direct repercussions on Native politics in both countries, if not throughout the world, much in the same manner as did the Mackenzie Valley Inquiry. It is likely that the ICC investigation will have a direct impact upon a similar ANCSA review to be made by the Department of Interior before 1991. It is also possible that the Canadian government will hold off on its own constitutional definition of aboriginal rights until the ICC commission makes its final report.