Copies of this article were sent out to members of the Yukon Presbytery by the Rev. Gordon Corbett, associate synod executive, on January 27, 1976 with the following note:

“There is an increasing (and understandably so) amount of militancy by Eskimo people — this speech is a sample — it does have serious implications for our church work and for Sheldon Jackson. I felt you should be aware of this.” (signed) Gordon Corbett. 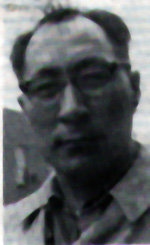 Background: The enclosed text is of a televised speech of Mayor Eben Hopson to the people of the North Slope Borough.

This speech was delivered at a time when the Barrow Education Association, the local NEA teachers union affiliate, had begun its annual contract negotiations. Last year, the teachers union was startled by the success of its Barrow local in gaining a 20 percent annual wage increase in its first negotiation with the North Slope Borough School District. The 20 percent wage increase resulted in a sharp cutback of non-certificated teacher positions held by Inupiaq-speaking teachers.

It is recommended that you contact Superintendent John Antonnen for his reaction to Mayor Hopson’s remarks.

(Picture Above:  MAYOR — North Slope Borough Mayor Eben Hopson. He is a former state legislator and a former executive director of the Alaska Federation of Natives.)

We Inupiaq are a nation of people occupying the circumpolar Arctic from Siberia through Alaska and Canada to Greenland. We share common values, language, culture and economic systems. Our culture has enabled us to survive and flourish for thousands of years in the Arctic where no other man or culture could. Among our entire international Inupiat community, we of the North Slope are the only Inupiaq who have achieved true self-government with the formation of the North Slope Borough. We have the greatest opportunity to direct our own destiny as we have for the past millennia.

Possibly the greatest significance of home rule is that it enables us to regain control of the education of our children. For thousands of years, our traditional method of socializing our youth was the responsibility of the family and community. From the first, visitors to the Arctic have universally commented on the warm disposition of our children. Corporal punishment was absolutely unknown. Boys and girls began their education with their parents and, by the time they reached their teenage years, they had mastered the skills necessary to survive on the land here. From that time forward, the youth — with his family and within his community — devoted his attention to his intellectual and social growth.

Eighty-seven years ago, when we were persuaded to send our children to western educational institutions, we began to lose control over the education of our youth. Many of our people believed that formal educational systems would help us acquire the scientific knowledge of the western world. However, it was more than technological knowledge that the educators wished to impart. The educational policy was to attempt to assimilate us into the American mainstream at the expense of our culture. The schools were committed to teaching us to forget our language and Inupiat heritage. There are many of you parents who, like me, were physically punished if we spoke one Inupiat word. Many of us can still recall the sting of the wooden ruler across the palms of our hands and the shame of being forced to stand in the corner of the room, face to the wall, for half an hour if we were caught uttering one word of our native language. This outrageous treatment and the exiling of our youth to school in foreign environments were to remain the common practices of the educational systems.

For eighty-seven years, the BIA tried to destroy our culture through the education of our children. Those who would destroy our culture did not succeed. However, it was not without cost. Many of our people have suffered. We all know the social ills we endure today. Recently, I heard a member of the school personnel say that many of our Inupiaq children have poor self-concepts. Is it any wonder, when the school systems fail to provide the Inupiaq student with experiences which would build positive self-concepts when the Inupiat language and culture are almost totally excluded?

Today, we have control over our educational system. We must now begin to assess whether or not our school system is truly becoming an Inupiat school system, reflecting Inupiat educational philosophies, or, are we in fact only theoretically exercising “political control” over an educational system that continues to transmit white urban culture? Political control over our schools must include “professional control” as well, if our academic institutions are to become an Inupiat school system able to transmit our Inupiat traditional values and ideals. My children and yours spend many hours in school each day, 180 days each year for 12 years. Today, the socialization process of our youth includes the formal instruction received in our school system. It is precisely because of this that our school system must reduce the difference between the language and culture of the home and that of the school.

We must now achieve “professional control” by examining the teacher and content of instruction. We must have teachers who will reflect and transmit our ideals and values. We must have Inupiat-centered orientation in all areas of instruction. I do not want my children to learn that we were “discovered” by Columbus or Vitus Bering. I do not want to hear that we were barbaric or “uncivilized.” I do not want our children to feel inferior because their language and culture are different from those of their teacher. I do not want to see school planning surveys which list hunting, fishing, whaling or trapping as a “social” or “recreational” activity.

The Land Claims movement and the self-determination attitude of the Alaska natives were largely responsible for the removal of the suppression of our native languages and culture: bilingual instruction became the new educational policy. However, this has generally meant that we use English as our primary language of instruction and somehow integrate Inupiat into the curriculum. The North Slope Borough schools must implement a program that is bilingual and bi-cultural. Our children must be taught in our Inupiat language, with English as the secondary language. To attain this goal, we must have teachers who are bilingual and bicultural, knowledgeable in our Inupiat culture and values. This can be achieved either with instructors who are Inupiat or who have been trained in Inupiat.

I have made the distinction between “political control” and “professional control.” Our Inupiat School Board will be forced to always preside over a predominantly white cultural school district.

What can we do about this problem? We must develop a teacher recruitment and training program to satisfy our needs.

1. Foremost, we must encourage and train our own Inupiaq to become teachers.

2. Recruit responsive teachers who are willing to learn both the Inupiat language and our cultural values.

3. Train teachers and offer financial incentives to those who become proficient in our language and culture, in addition to Inupiat history and ideologies.

I feel that these recommendations are realistic in view of the economic recession in the lower forty-eight but, most significantly, because of the universal developing awareness and appreciation of our lifestyles.

Americans are beginning to assess their own values and finding them compatible with our own. We can now afford to be selective of our teachers. I believe we have the capabilities to assess and recruit sensitive teachers. In addition, we should select teachers who are willing to become contributing members of the community. We must strive to break down the barrier between the community and the school: rather than being an integral part of the community, the latter resembles a colonial fort. We must end teacher segregation in the North Slope. We must rid ourselves of these temporary residents who are here merely for financial gain. A number of teachers have already demonstrated their willingness to live among us as neighbors and friends. They have become permanent members of the community. They identify with us and share our concerns.

Our teachers are the highest paid teachers in the entire United States. A teacher with no experience earns $16,000 for nine months’ work, while an experienced teacher can make $30,000. In addition to this, we pay for many of our teachers’ living expenses: we pay their water, electricity and gas bills and over half their rent:

What are we getting for our money? We should be able to hire the best bilingual-bicultural teachers in the world. We should have teachers who can teach well in Inupiat schools. For our money, we should have the best schools in the nation, surpassing any of the elite prep schools in the East. We should have teachers who earn their keep by effectively teaching our children instead of those who believe they earn their way by demonstrating the mechanics of a pencil sharpener. Last year, our teachers negotiated a 20 percent monthly raise. Most of our own Inupiaq teachers are not certified teachers and were not included in the teacher union salary negotiations. As a direct result of the 20 percent wage increase, several Inupiat non-certificated teacher positions were cut from our school system. How can it be said that we have political control over our school when we allow such inequities?

The Borough is building new teacher housing which will be managed by our Borough Housing Authority to insure that our teachers are housed throughout Barrow and Browerville, as well as in our outlying villages. However, the housing is not adequate to desegregate a privileged class of people with the advantages of a subsidy that all our other Borough citizens do not enjoy. Rather, I want teacher citizens, both white and Inupiaq, certified and non-certified, to share their cost of living with us. I want teachers to pay their own rent at fair market value. As the largest homeowner, the Borough Housing Authority can maintain the market fairly by keeping public housing rents as low as in economically feasible. I want our teachers to pay their own utility bills since this will most likely result in significant savings in both water and fuel.

It is important to remember the lessons of the past. In addition, we must search and master the new changes if we are to continue to dominate the Arctic. We have demonstrated we can survive the trespasses which have been perpetuated upon us. We have been successful in establishing our own home rule government. We have been able to achieve self-government. We must strive to insure that our Borough, our city governments and our school systems reflect our Inupiat ideals. We are Inupiaq.