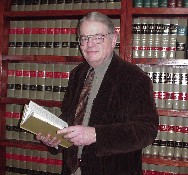 How I Met Eben Hopson

Eben Hopson became a familiar name to me in 1968 when he took over the management of the Alaska Federation of Natives, which was in financial trouble at the time. It seemed that after he took over, there was less worry about the future of the AFN, and we were glad Eben came to live with us in Anchorage.

At the time Eben came from Barrow to Anchorage, I managed Anchorage’s Community Action Agency. This was a private non-profit corporation funded by the old federal Office of Economic Opportunity. Community Action Agencies were supposed to organize communities to “fight poverty.” In restrospect, President Johnson’s war on poverty seems to have been a bit of show business to mask the terrible things we were doing in Viet Nam. Remember “guns and butter?” But, the diversion was successful.

I quickly learned how to mine the butter, and realized that I could get federal money to do just about whatever I wanted to do.

I wanted to do something about poor village health conditions in rural Alaska. I had come to the Community Action Program from the employ of the Communicable Disease Center in Atlanta for whom I had served as a Public Health Advisor to California, New York, and Alaska. So, I wrote a grant application proposing to organize health delivery service programs aimed at senior citizens, and it got funded in the summer of 1969. We got a grant of $40,000, and I began wondering what I was going to do with it.

In the fall of 1969, I was visited by Dr. Joseph English, a friend of the Kennedy family, and a psychiatrist who had been enlisted in the war on poverty to organize low-income community health clinics for the Office of Economic Opportunity and the Peace Corps. His visit to Alaska followed that of Sargent Shriver, who directed Johnson’s anti-poverty and Peace Corps programs. When Shriver visited Nome, he was told that Nome’s Presbyterian Hospital was about to close down, and would leave Nome without a hospital. So, Shriver asked his friend, Dr. English to visit Alaska to see what he could do.

Dr. English and I met at the Top of the World lounge of the Anchorage Westward Hotel. He asked me to meet him for a drink because he had heard that I had visited all of the villages of rural Alaska to eradicate measles in 1965-1966, and had an interest in rural village health.

Dr. English told me that he had money to fund comprehensive clinics in rural Alaska, but that he would need a work program plan that would meet the approval of Alaska’s conservative Medical Association, as well as the Alaska Indian Health Service.

English said that while he had lots of money for clinic construction and operation, he had no planning funds. He had always relied upon medical schools throughout the nation to finance the initial planning and organization of low-income community medical clinics. He said the medical schools had sufficient clout to overcome the resistance of the local medical associations to free clinic services for the poor, and used them for medical student clinical training.

There was no medical school in Alaska, and he said he had not been able to find any one else willing to take on the task of planning, organizing and operating village clinics. Strangely, the Alaska Native Health Service had turned down his money, stating that if Congress had wanted the Indian Health Service to plan village clinics, it would have appropriated money for this purpose. It was not interested in Joseph English’s OEO health clinic money.

So, I told Dr. English about my $40,000.00 planning grant money, and I offered to hire someone to coordinate the planning that he needed. I persuaded Dr. English to agree to make a large grant of funds to the AFN for regional village clinic organization. I hired John Shively, who was just leaving his term as a Vista Volunteer in Bethel, to work with Eben Hopson to organize an AFN Health Department, and to sponsor village clinic planning.

That is how I met and began to work with Eben Hopson. The village health clinic programs Eben began in the Bethel and Nome regions succeeded and flourished, and provided the model for health and medical services throughout rural Alaska.

My relationship with Eben Hopson began this way, and continued until his death ten years later in 1979.